Looking at the Country  GDP ranking, just four countries – the United States, China, Japan and Germany – account for more than half of the world’s economic output per gross domestic product (GDP). The GDP of the United States alone is greater than the combined GDP of 170 countries.

Using data and estimates from the International Monetary Fund (IMF), a database makes it possible to establish this ranking with the latest forecasts for 2022.Below is an infographic to visualize these GDPs in the World. 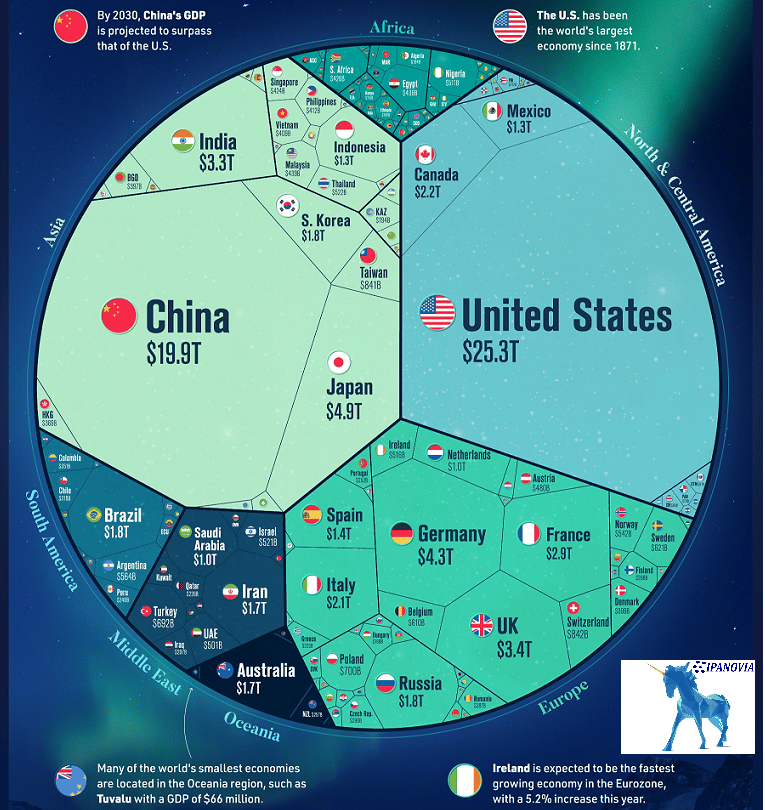 GDP serves as a general indicator of a country’s economic output. It measures the total market value of final goods and services produced in a year. In addition, the GDP also takes into account the production of services provided by the States. It is for example defense, health care or education.

Generally speaking, when the GDP increases in a country, it is a sign of greater economic activity.

At $25 trillion, the United States’ GDP represents about 25% of the world economy. The finance, insurance and real estate sectors ($4.7 trillion) contribute the most to the country’s economy. They are followed by professional and business services ($2.7 trillion) and government ($2.6 trillion).

China’s economy is second, at nearly $20 trillion. China remains the world’s largest manufacturer in terms of production with extensive production of steel, electronics and robotics, among others.

According to country ranking by GDP, the largest economy in Europe is Germany. It exports around 20% of motor vehicles in the world.

Ranking of the top 10 countries by GDP

At the other end are the world’s smallest economies in terms of GDP? These are mainly developing countries and island countries.

With a GDP of $70 million, Tuvalu is the smallest economy in the world. Located between Hawaii and Australia, this volcanic archipelago’s largest industry relies on territorial fishing rights.

In addition, the country derives significant revenue from its “.tv” web domain. Between 2011 and 2019, he earned $5 million a year from companies including Amazon, Twitch, to license the Twitch.tv domain name. It is equivalent to about 7% of the country’s GDP.

Like Tuvalu, many of the world’s smallest economies are in Oceania. These include Nauru, Palau and Kiribati. Additionally, several of the above countries depend on the tourism industry. This industry counts for more than a third of their employment.

World GDP has been growing at an annual average of 2 to 5% since the 1960s. But the annual rate varies greatly from one country to another. In China the annual growth is rather around 8 to 10% over the last 20 years. Globalemeent, GDP growth is phenomenal if we look at the figures in Gross value.

Below is the evolution of GDP for the top 15 countries over more than 60 years.

The fastest growing economies in the world in 2021

With 123% GDP growth, the Libyan economy is estimated to have the strongest rise .

Oil is driving its growth, with 1.2 million barrels pumped daily in the country.

The Irish economy, with an 13% GDP growth, is supported by the world’s largest multinational corporations. Facebook, TikTok, Google, Apple and Pfizer all have their European headquarters in the country, which has a comparatively low corporate tax rate of 12.5%. This is a rate of about half of the world average. But these rates are expected to change soon, as Ireland has joined the OECD on a minimum corporate tax rate of 15%. This agreement was finalized in October 2021.

After the Covid Pandemic of 2020 and 2021, growth forecasts for 2022 were at an all-time high. Finally, this was without counting on the conflict in Ukraine, the shortage of Oil, Gas, and food resources which would lead to galloping inflation throughout the world, like inflation records in the United States.

level of inflation in the United States

The inflation rate in the United States experienced its strongest annual increase in more than 30 years (source Consumer Price Index – US Bureau of Labor Statistics – Nov.) from the end of 2021. In 2022 the trend is still growing and is expanding to the rest of the world.

Fuels, transport and meat products are experiencing the largest increases.

Where is inflation hitting the hardest?

A zoom in on five areas of consumer spending that are particularly affected: by how much prices have risen over the last year and why prices are rising so quickly:

Natural gas prices rose for reasons similar to gasoline. Supply is slow to return, and oil and natural gas production in the Gulf of Mexico was affected by Hurricane Ida in September.

The global semiconductor crisis is causing chaos in the particularly hard-hit automotive industry. Modern vehicles can contain well over a thousand chips, so limited supply has hampered production of nearly a million vehicles in the US alone. This shortage of chips is reflected in the market for used vehicles, prices which have jumped 26% in a single year. The car rental sector is also on the rise with rates up almost 40%.

Meat producers are facing some headwinds. The limited availability of labor is also a problem for the industry. As a leading category, inflation is high, but in some categories of animal products, such as beef and bacon, inflation rates have reached record highs

The surge in lumber and other commodity prices earlier in the year had obvious repercussions. Materials aside, shipping these bulky goods has been a challenge. 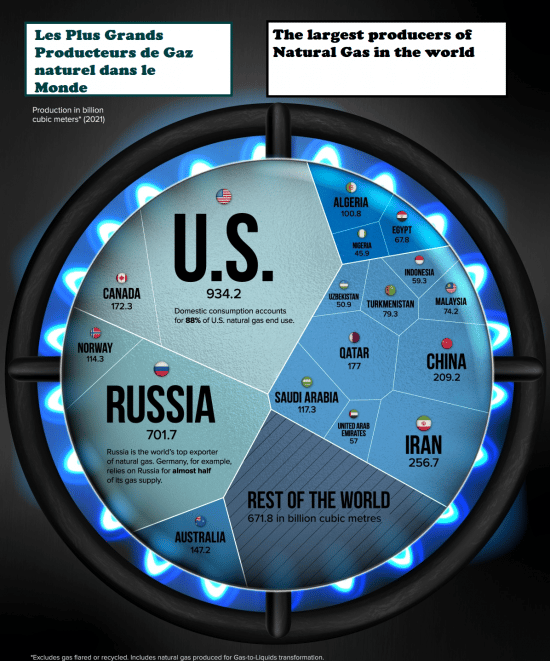 Where will we get Gas to fuel our economies and homes ?

The European Union imported about 40% of its natural gas from Russia. What are the alternative sources ?

Who are the largest producers of natural gas ?

USA 🇺🇸 and Russia 🇷🇺 alone makes more than 40% of the total with US being close to one-quarter of global #production.

European countries are urged to find solutions : Canada and Germany have signed an Hydrogen Alliance where Canada  intends to become a top global supplier of clean hydrogen and build a Canada-Germany supply corridor.

Energy will rule the world this Winter, but are we getting ready and fast enough ? What else !

Our team of experts around the world guides you to the best advice in international development and to put in place the right strategy.