Berlin has been a leading startup city for 30 years

The Berlin city has taken advantage of the great opportunities to reinvent itself after the fall of the wall. A dynamic ecosystem for the digital economy has emerged. One’s immediately feels the vibrant and dynamic spirit favorable to entrepreneurs. A range and festivals, museums, galleries, artists, designers, musicians; the presence of internationally renowned festive venues and events of all kinds makes it the “Hipster” capital city.

Creating a Startup in Germany

German start-ups have received a record 6.2 billion euros in fundraising in 2019, 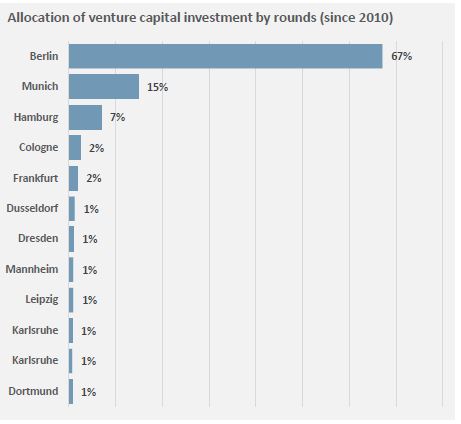 an increase of 36% compared to the previous year. The majority of the invested capital – almost 67% – went to Berlin which is one of the major hubs for start-ups in Germany. 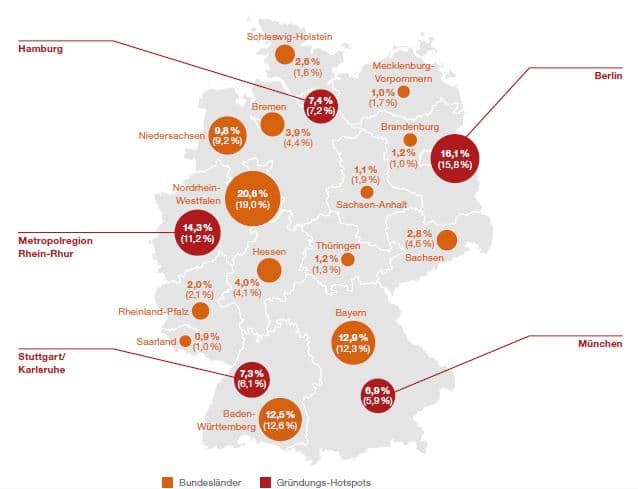 Berlin is the hub that concentrates the most Startups, i.e. more than 16% of the German total in 2019, and especially those experiencing the strongest growth.

2018 (in parenthesis) and in orange in each Region – Bundesländer.

A Large pool of Advantages for Startups

Berlin is the city for Entrepreneurs. They found large spaces to rent for low rents and a large pool of highly qualified talent. Young talents come from all over the world for the quality of life, the working atmosphere inspired by California’s Silicon Valley, the cultural offer, and the international environment which has been in its DNA since the post-war period. Many young Europeans study there as part of exchange programs and stay there to set up their start-up. They can take advantage of an incomparable climate for innovation and creation. Today more than a third of the teams working in Berlin start-ups are foreign citizens.

The ecosystem now provides a total of more than 80,000 jobs in the Berlin City

Start-ups are not only an extremely important new economic sector but also power the already strong traditional economy with their innovations. Many large companies such as Deutsche Telekom or E.ON as well as medium-sized companies have founded accelerators that provide financial and structural support to start-ups.

Below is an overview of the major companies and main accelerators, including Plug & Play, the accelerator of the media and internet Axel Springer giant, alongside those of the giants of the German industry Siemens, Airbus, Bayer, Deutsche Telekom 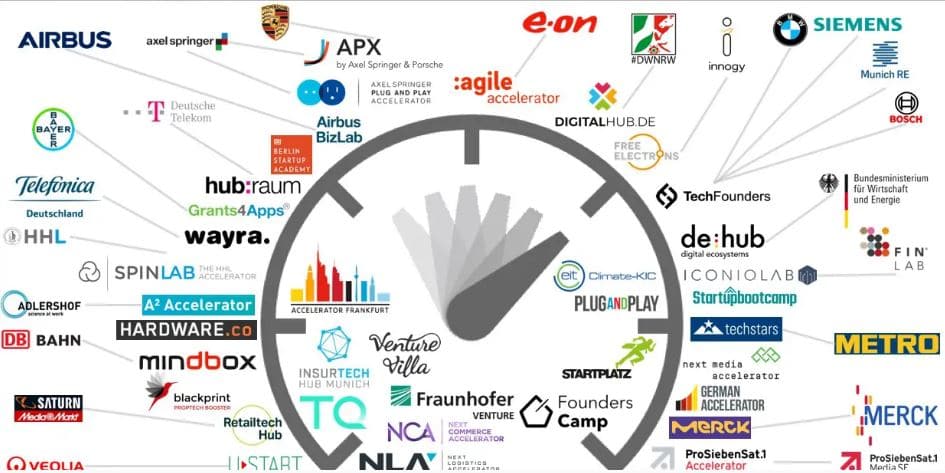 Start-ups in the field of financial technologies and electric mobility are fundamentally changing the banking sector and the automotive industry. Technologies such as artificial intelligence or blockchain as well as the growing importance of SaaS business models position Germany at the forefront of European companies in the sector.

Rocket Internet is one of the companies that has had a great influence on the formation of the ecosystem in Berlin City. After its creation in 2007, Rocket Internet founded Zalando in 2008. It is valued at €16 Billion today. In total, Rocket Internet supported six unicorns. They employ around 30,000 people through their participation in companies working in 110 countries. They have given birth to a number of entrepreneurial vocations.

This is the case of Valentin Stalf, one of the founders of N26. In 2013, he was employed in one of the Rocket internet teams. He observed that banks do not have the slightest idea of ​​what digitization is.

Although traditionally, the center of finance is located in Frankfurt, Berlin now attracts 35 % of start-ups in the sector. In the Fintech sector, the N26 NeoBank is one of the new players. They revolutionized the banking business model. Valued over €3.5 billion, it attracts more than 10,000 new customers per day. In 2019 it crosses the Atlantic to reach the USA and has a 100 million customer target.

Berlin continues to attract the biggest players in new technologies, many other unicorns have announced plans to open a location in Berlin, like Tesla, which plans to open a GigaFactory

The German business sectors of Startups are covering information and communications technologies (30.2%), followed by the food and consumer goods sector (10.6%), the medical and health sectors (8.5%), and the automotive / mobility/logistics (6.7%). The other startups are spread across various other fields.

Through its digital plan 2020, the German government wants to make Germany the “first country with digital growth in Europe”, with considerable resources to achieve this goal.

Berlin is a nerve center of the new economy, for Germany but also at a global level, with 76% of start-ups deploying an internationalization plan

Every year the biggest European Festival on Technology takes place there, the Tech Open Air (TEO)  the opportunity to meet the technologies that will change the way we live and work tomorrow.

Germany is leading the European scene of  Unicorns.

Ipanovia supports this ecosystem in its strategy to conquer international markets.