Gigafactory investments are flourishing in Europe

The Age of Cathedrals has gone ? The Age of Gigafactories has come. Every month is unveiling new gigafactory investments.

The scene is really heating up in Europe . Europe has 40 new gigafactories investments planned, representing a total of around €30 billion

Governments and Car industry on top of new gigafactory investments

With a production capacity of nearly 900 gigawatt-hours, or 77% of the world’s total, six of the world’s top ten battery manufacturers are located in China. Behind China’s dominance in batteries is its vertical integration throughout the electric vehicle supply chain, from mining the metals to producing the electric vehicles. China is also the largest market for electric cars, accounting for 52% of global sales in 2021.
Poland is second with less than one-tenth of China’s capacity. It’s also home to LG Energy Solution’s Gigafactory in Wroclaw, the largest of its kind in Europe and one of the largest in the world. Overall, European countries (including non-EU members) accounted for only 14% of global battery production capacity in 2022.
Although the U.S. is overshadowed by China in terms of batteries, it’s also among the world’s lithium-ion powerhouses. In 2022, there were eight major battery factories there, located primarily in the Midwest and South.

Battery is the new gold:

As the desire to reduce carbon emissions from transportation has grown, the producers of EV batteries have seen a surge in demand. At present, Chinese businesses account for 56% of the EV battery industry, with Korean firms second at 26% and Japanese companies making up 10%. 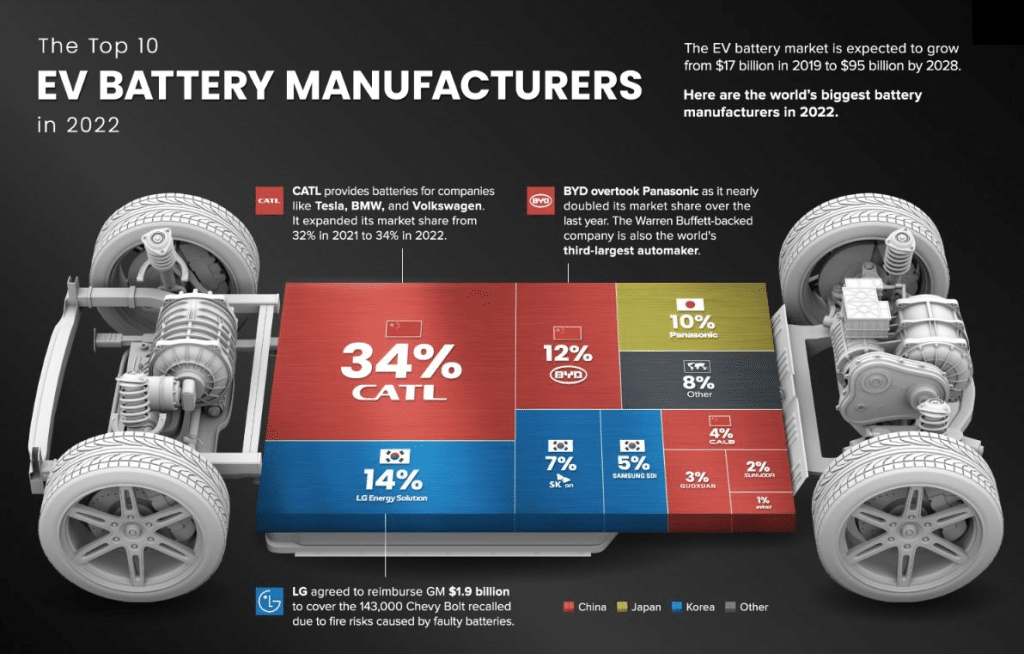 The top battery supplier, CATL, increased its share from 32% in 2021 to 34% in 2022, with a third of all EV batteries sourced from this Chinese corporation. CATL supplies lithium-ion batteries to Tesla, Peugeot, Hyundai, Honda, BMW, Toyota, Volkswagen, and Volvo.

Most battery/EV manufacturers are from Asia, but some European Players are getting into the game.
Swedish start-up Northvolt has already secured contracts worth €27 billion, including a €14 billion order from Volkswagen AG to produce its batteries for the next decade and a €2 billion order from BMW Group.
Norwegian energy company FREYR is planning a gigafactory in Mo i Rana, powered by wind and hydro energy, and a 50 kW plant in the US.
In France, the start-up Verkor is aiming for a gigafactory in southern Europe in collaboration with Schneider Electric and InnoEnergyEU.

Batteries are made from rare earths (REE) such as lithium, nickel, cobalt or graphite, depending on mining activities. There are also a number of questions about the environmental impact and recycling implications.

Are we entering the era of a new electrical revolution ?

Since 2019, France is the leading destination in Europe for Foreign investments. Why do foreign company choose France. Our review of attractiveness, investments by sectors and breakdown of investing countries for your guidance.

Our experts will be pleased to advise your international development projects, do not hesitate to contact us